Set in his Brooklyn workspace, the film follows photographer Daniel Gordon as he reflects on the pleasures and perils of a decade-long commitment to an intensive studio-based practice. With artist (and wife) Ruby Sky Stiler working next door, Gordon guides us through the process of creating several of his signature “constructed tableau” works—exuberantly colorful photographs of baroque tabletop still lifes that the artist meticulously crafts himself.

“Daniel Gordon Looks Back” is the latest film from New York Close Up, Art21’s series of documentary shorts devoted to artists in the first decade of their professional career, living and working in New York City. Past episodes have focused on over 30 artists, including Lucas Blalock, Jamian Juliano-Villani, Rashid Johnson, Jacolby Satterwhite, and many others. New York Close Up has been nominated for a Webby Award and has been screened at prestigious film festivals across the world.

“Daniel Gordon has been featured by Art21 because of the stand-alone quality of his pictures, and because his story resonates with all creative people,” said Tina Kukielski, Executive Director of Art21. 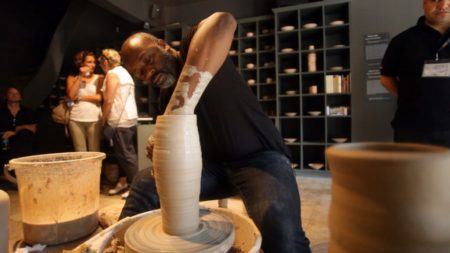